A Busy Summer of Work and Pleasure

The work commenced in April. We tossed our upcoming responsibility to host the 2017 Idaho Writer's League state conference earlier, but I was worried about lining up a really good program. Others thought it was still early, but I pushed. We settled on the theme, Writer's Rendezvous, and decided a casual atmosphere went with it. As secretary, it fell to me to invite most of the workshop presenters. Several times when I thought all was set, someone dropped out and a new presenter had to be found. In the end we had an excellent program lined up.


I was right about getting started early. By the time we did, it was too late to reserve our usual venue. We wound up at Travel Lodge, more out of the way, less well maintained, smaller meeting rooms, no food service, but a lot less expensive. We were able to invite writers to attend at a greatly reduced rate. The local newspapers printed six excellent stories about the conference that brought local non-members to the conference. More members came from Northern Idaho than had ever made the trip when the annual conference was in Southeastern Idaho. But, largely due to the large and closest Idaho Falls Chapter having folded in 2016 and no success getting the Idaho Falls newspaper to carry our articles, our attendance was low--thirty-five! In 2011 we drew one hundred. Thank goodness we came out on top that time. We had funds to cover what we went behind this time.

In keeping with the theme and our invitation to gather around the rendezvous campfire, our decorations were simple and casual, a frontier campfire scene and banquet centerpieces with camp chair favors, just enough to create a little atmosphere. 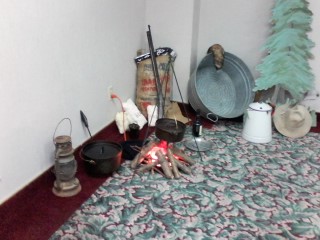 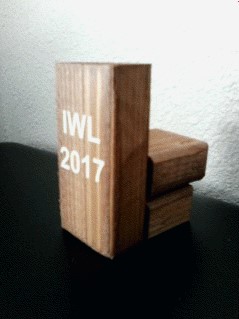 I designed and made or contributed most of the items with some items contributed by Cynthia Deatherage and Lynn Mickelson.

The summer wasn't all work. Our daughter and son-in-law took us to the 2017 Southern Oregon Kite Festival near Brookings, Oregon. They came and got us, and we traveled in comfort in their 42 foot coach. The festival was fantastic--at least to me. I love kite flying. This extravaganza of indoor and outdoor kite flying is a huge pleasure for kite enthusiasts. Nine experts flew big kites inside the high school gym with no wind.

We walked more than a mile to get to the outdoor demonstration of kite flying where we saw many groups of four to nine kites flown in formation each kite in exact sync with the other as they spun, dipped, and soared in time with music. Even the decorations floated one way or another. The program lasted three hours, its climactic concluding kite, pictured below, was a life-size whale! The flying crew brought it down and rolled it into a bag right in front of where we were sitting. 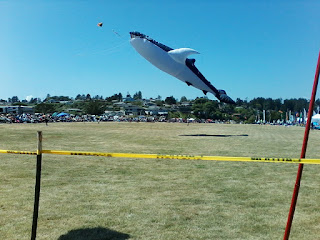 Brookings is a major fishing port. The marinas were full of fishing boats with a few pleasure boats also moored. On the walk back to the coach, we bought crab right off a boat. The captain had returned at noon from his daily fishing trip. He cooked and cleaned the Humboldt crabs in front of us. This was Friday. On Monday we returned by purchase three kinds of bottom fish. What treats for inlanders.

A few days (20 August) after returning home, two of our children and their families came to stay overnight as a jumping off place for viewing the total eclipse the next day. One family traveled to a dune north of Idaho Falls. The other wanted to see it for a few seconds longer, so they took a back road north of Mackay. We settled on our driveway. I took photos with my little digital camera to make a slide show of the progress of our 98 % eclipse. It shows how the moon moved across the sun, exposing an arc that gradually progressed around the black edge from the left side of the sun, around the bottom, and ended almost at top right. It took about one hour and fifty-eight minutes and produced about a minute of dusk just past the end of the first hour. I wore my sun hat and, unlike at the kite festival where it had been forgotten, did not get a sunburn.
Yesterday our birch tree was almost completely yellow. We three or four nights of frost but not sharp freezes have turned it golden yellow with some green leaves remaining and many leaves already on the ground. Last year the first frost was sharp. The tree completely turned a breathtaking lemon yellow overnight. It was so beautiful, but I waited until the next day to take a picture of it. A wind came up in the night that stripped it clean. Yesterday the weather report forecast wind for evening, so I ran out to photograph it before any more leaves could fall. It's pretty, but not so full and bright as last year. 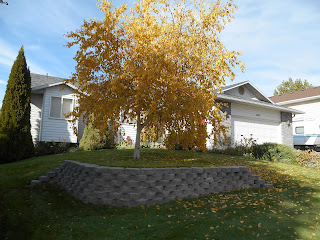